Ontic, a leading full lifecycle service provider for the global aerospace industry, was proud to see Level 3 apprentice Karim Ali reach the finals for Apprentice of the Year at the SoGlos Gloucestershire Business Awards. 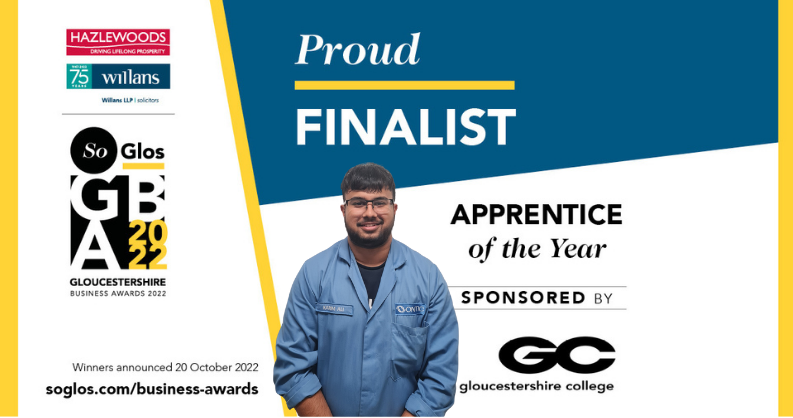 Karim joined Ontic almost three years ago and has already made a name for himself. Initially joining as a Level 2 apprentice, Karim’s promise was quickly spotted and he is now studying for his Level 3 apprenticeship. However, not content with focusing solely on mechanical instrumentation, Karim is studying elements of electronics to make sure he is ready to support the changing needs of the global aerospace industry.

Commenting on Karim’s progress so far, Kashan Pervaiz, Operations Cell Manager, said: “Even though Karim has been working under supervision in line with aviation industry regulation, his work is already good enough to contribute to our production targets. For someone so early in their career, he continues to impress the team on a daily basis.”

One of Karim’s key achievements to date has been learning to build and test new cockpit flight instrumentation – and he completed this in the same timescale it would have taken an experienced technician learning the skill on the job.

Karim has now progressed into the Electro/Mechanical repair department where he is working on complex Tornado instrumentation. His current manager, Steve Purveur stated: “Karim has been quick to master the principles of barometric instruments and is working to a level that normally takes many years to achieve”.

Thinking about his future with Ontic, Karim shared that he wants to transition into a team leader position initially and then a cell leader – this means he would lead a team of 20+ engineers and technicians for one of Ontic’s value streams.

Karim said: “As well as studying technical aspects, I’m interested in strategy. It’s important to understand our global portfolio and I want to take on a role that will let me grow future talent similar to myself. My apprenticeship with Ontic is setting me up for success and giving me more experiences than I could get elsewhere. Making the finals at the SoGlos Awards for Apprentice of the Year shows how hard work can pay off and I’m delighted to have made it this far against some great competition.”

Karim’s journey has been heavily influenced by Gloucestershire Engineering Training (GET) where he completes all of the academic elements of his apprenticeship. Warren Thomas, CEO at GET, has also been on hand to provide encouragement to Karim and the team of Ontic apprentices studying there.

Expectations are that Karim will become one of the company’s premier repair and overhaul technicians in the barometric area in the future.

You can find out more about a career at Ontic on our website www.ontic.com/careers.

As the leading OEM for established, certified aircraft parts, we’ve been giving the aircraft industry a new lease of life for over 45 years.

Ontic’s broad portfolio of established products and MRO services span a variety of aerospace sectors, including over 6,500 top-level assemblies.

As the top supplier of established aircraft parts, leading OEMs around the world continue to license and divest their product lines to us, freeing them to focus on the future.

At Ontic, we’re experts in what we do. Guided by our core values, we’re a team of driven individuals who are committed to continuous innovation in the aerospace sector.